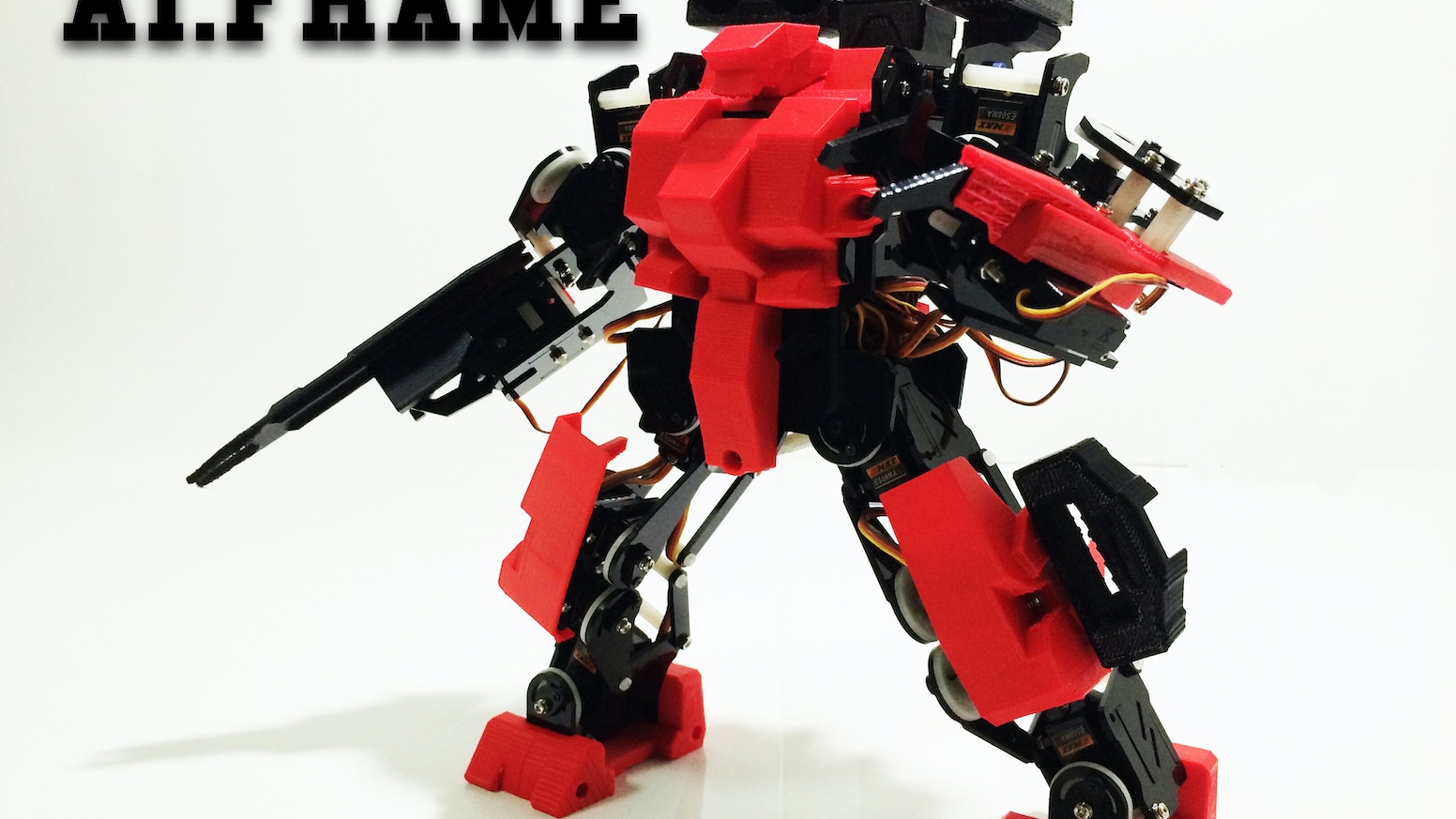 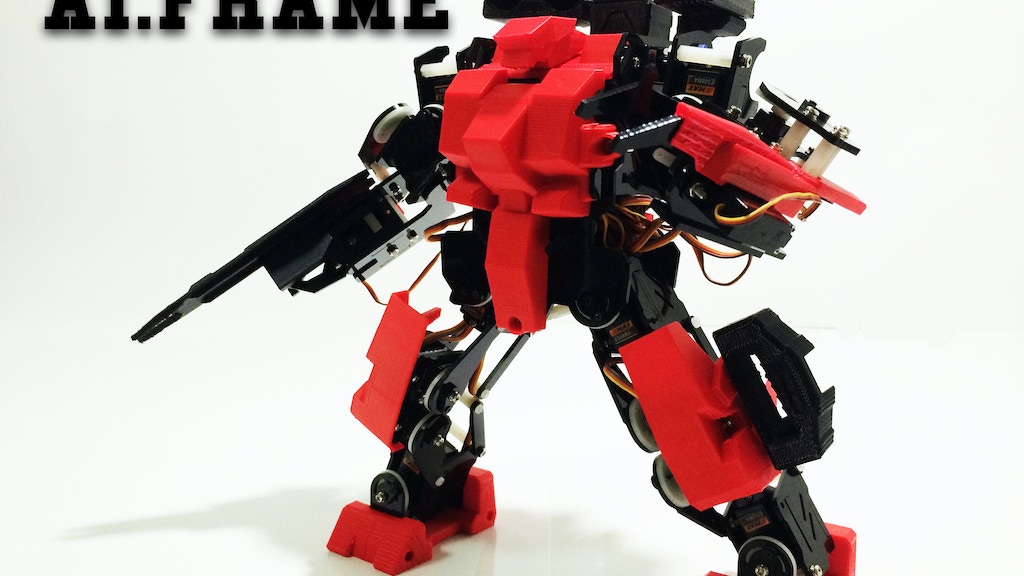 MAKE: “Ai.Frame caught my eye because of all the cool moves the robots do, although turning around becomes a surprisingly difficult option for a walking robot.”

Robots play a big part in our lives. They are toys in your childhood, they are heros in the movie, they are assembling-arms in the factories, they are helping with medical procedures in the hospitals…

For us, robots are childhood mermories, filled with sounds of joy and laughter as well as expressions of curiosity and amazement.

We at Ai.Frame team want to share our experiences with you through our products, for us inventing robots is fun, it’s passion, filled with endless possibilities.

There are many great robotic inventions on the market, but in the meantime, for most people, they are too expensive,($5000 or more, open-source ones are even more expensive), they are less personalized, they are too difficult to assemble and control.

We wanted to give everyone something different.

The Ai.Frame is an open-source miniature humanoid robot.  It is versatile, it has abundant upgrades, customizable commands, both pre-assembled and self-assembly available. It is powered by smart servos and sophisticated sensors.

It has multiple color options.

Ai.Frame has a rich collection of colors and styles , you can always find a suitable model !

It has abundant upgrades.

You can customize it whatever you like,to make it a special edition only you have.

What can you do with Ai.Frame?

Motion: Make Your Own Moves

The robot’s sophisticated structure is designed to make motion both precise and versatile. The Ai.Frame Apollo has 16 degrees of freedom, and the Rex has 9. Operated by an efficient controlling system, the Ai.Frame executes your commands almost instantly.

and perform up to 10 pre-programmed motions. As we’ve designed the Ai.Frame to be exceptionally versatile, you can program over 300 distinctive motions and create thousands of combinations with multiple devices.

App for Android/iOS: once connected with your smartphone or tablet via Bluetooth, you can customize motions with simple taps. The app is free to download and upgrade on our website (http://aiframe.me).

Windows PC: if you are a hardcore maker more skilled at conventional coding and would like to further customize the Ai.Frame on a PC, we have you covered. The software is also downloadable and upgradable on our website.

Joystick Controller: You can use a Arduino compatible joystick controller to control the Ai.Frame.

Wearable controllers are not just things in science fiction films with special effects, now you can have one of your own! It can accurately capture your upper torso movements and control the robots body, making you more in control of your robot. use it to control your humanoid robot and have robot battles with your friends! this wearable controller is based on an Ardunio platform development. If you are a tech developer, then you are free to use it to control just about anything.

We’ve been working on Ai.Frame for over 2 years now. The robot that you see in the video is a real, working prototype.

With your support, we can bring Ai.Frame to fans worldwide. While we’re close to entering production, your contribution will help fund:

We provide two kinds of joy to our fans:

As experienced engineers, we have a thorough understand of robot configuration and construction, and we incorporated rich body details into the Ai.Frame to simulate the structure of the human body. The Ai.Frame Apollo’s skeleton contains 109 pieces and its outer shell contains 12, while the Ai.Frame Rex consists of 98 pieces. We also made made a concerted effort to optimize the molding and screws for the strongest possible structure. Nonetheless, you can choose to either build an Ai.Frame from scratch or to have us assemble it for you.

You can purchase pre-assembled set or you can enjoy fun of self-assembly.

Sensor: Thinking for Itself

With its sophisticated sensors, the Ai.Frame comes with all the interactive features you could want in a humanoid robot. Both prototypes are compatible with the sensors and boards in the smart bundle. Additional sensors can also be added or further upgraded.

Why we love Open Source Hardware?

Many years ago, I happened to read the story of Marc Fleury, who is the founder of JBoss — a super successful open source project.  I still remember the excitement of knowing how much open source can win the respect and influence the world.
Years later, when I started project Ai.Frame, the idea instinctly comes to my mind.
Yes, we are going to open source this project after the Kickstarter campaign completes.  We are going to open the design documents, circuit diagram, CAD files, PCB layout, every bit of app on mobile and software on PC, etc.
Yes, we learn things mostly from the community, and John Doerr’s words are right: “I think you can repay that mentorship only by mentoring others.“
Learn it. Build it. Share it.
“I have seen the future and it works.  Soon, one day, we will all walk through walls. Not just me, everybody.” — Marc Fleury

We are the Ai.Frame team, Jiaqi Hu and Zebo Sun. We both graduated from the Harbin Institute of Technology in China and majored in mechanical and electronic engineering. As passionate makers, we’ve been receiving awards for our inventions since our school years, including model planes and model windmill generators.

A technology startup event in Shanghai brought us together for a collaboration in 2010. Our first collaborative invention, a delivery drone called “Linkall” (http://linkall.me), received a lot of media attention in China in 2011.

Our backgrounds in engineering and shared passion for cool anime sparked the basic idea for the Ai.Frame Robot in 2012. We usually collaborate on every task, because while one of us is more artistic in making cool design and envisioning features, and the other is better at computing and actualizing ideas. The Ai.Frame started with sketches, 3D images, and hundreds of prototypes. We tested out various configurations, sizes, material, servos, moldings, and controlling systems, and finally settled on the overall look and features you’ve seen here.

Body parts: We have begun beta tests among first users, and discovered that some parts were more susceptible to breakage during assembly, especially the fingers and toes of the wooden prototype. To deal with this issue, the parts will be reinforced for durability and spare parts for more fragile pieces will be included in the package.

Servo: The torque of servos must match up with different joints, and if there is a mismatch, damage occasionally occurs. We advise you to read through the user guide before assembling an Ai.Frame, and please ensure that makers under 18 assemble and test the Ai.Frame under the supervision of parents or teachers. Once the project ends successfully and we enter mass production, we will make further improvements in safety and have the Ai.Frame certificated by a nationally recognized lab in the US.

Software: The smartphone and tablet apps are new and we are still working on debugging. Before you receive the finalized product, we will continue to upgrade it and will deliver an even smoother and more functional app and software experience.

Production and Shipping: We have partnered with a global manufacturer for production and shipping. We are confident that we have a solid supply of quality components, so although unexpected issues can always arise, we will do our best to produce and deliver the Ai.Frame on time.

Some other challenges included the coordination between robot body weight and size, body balance, joint movement range, adequate reserved space for controllers and boards, and of course the eternal struggle for affordability. 5 generations of Ai.Frame, in fact, have already been developed in our lab. The first two generations didn’t have fingers, and the third one was as twice the size of the current prototype. Even the fourth generation Ai.Frame didn’t have very agile joints and there were few cases of servo damage caused by torque mismatch. However, we persevered and learned through trial and errors, and now, we’re very excited to share our work with you!