RAPIRO: The Humanoid Robot Kit for your Raspberry Pi 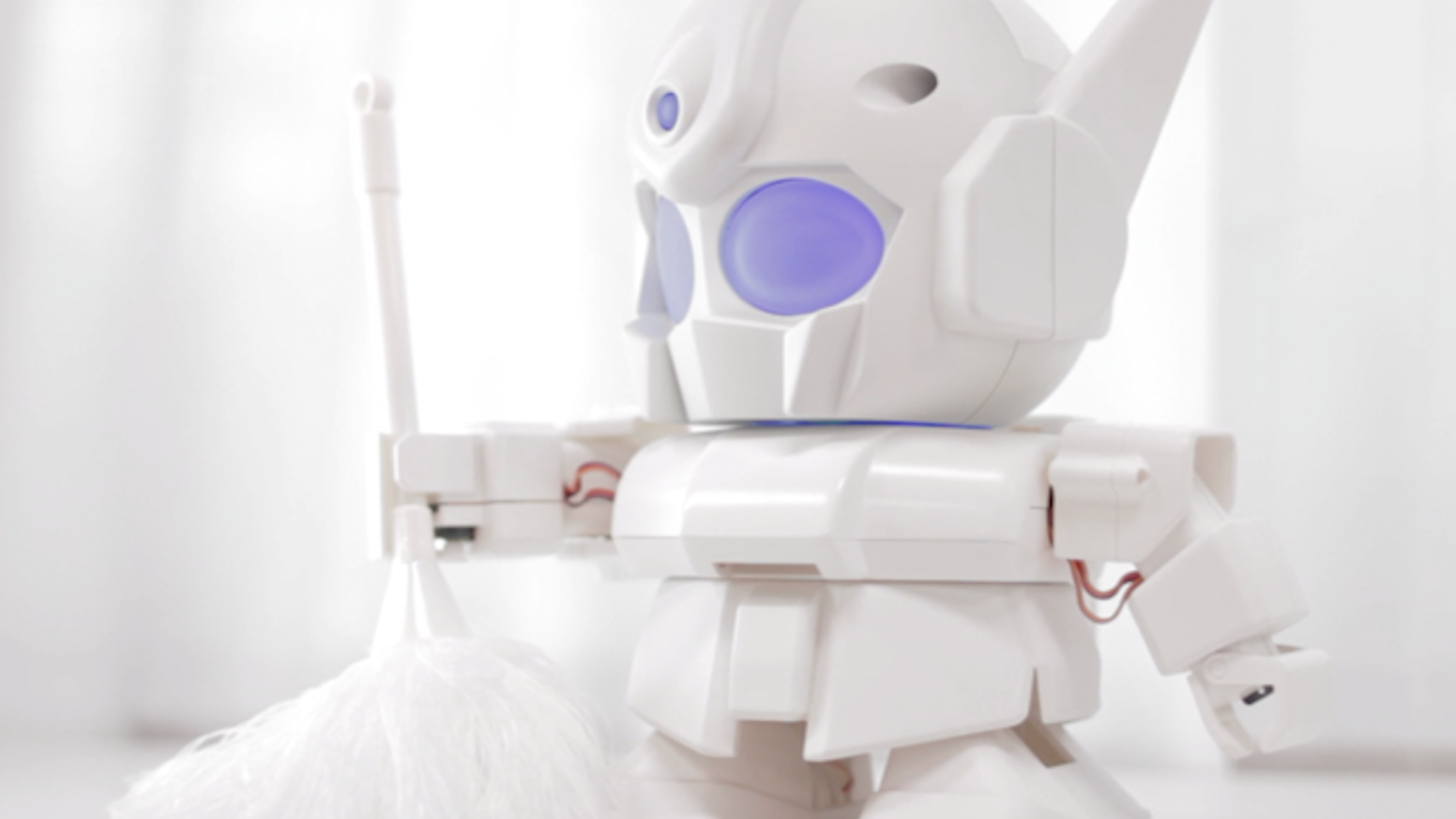 RAPIRO is a cute and affordable robot kit designed to work with a Raspberry Pi. It comes with a Arduino-compatible servo controller.
Created by
Shota Ishiwatari 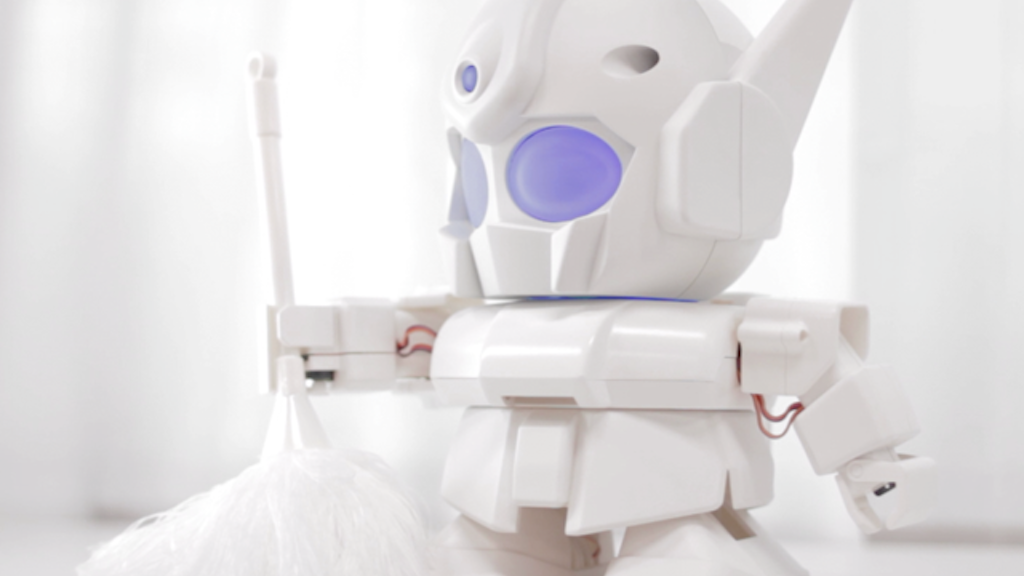 RAPIRO: Looks small, acts large, its limitless possibilities all depend on how you program it.

* Kits available on kickstarter do not come with a Raspberry Pi, a Camera module, a PSD distance sensor and speakers.

RAPIRO comes with a total of 12 servo motors, one for its neck, one in the waist, four for the two feet, and the final six for its two arms. Rapiro can walk with its feet, can grip a pen, and can turn its head and waist.

I believe that RAPIRO can be a catalyst between robotics and Paspberry Pi. We want to start a revolution in cute, cool, affordable, customizable, and programmable robots. If we are successful in our kickstarter, we will publish 3D data (.stl) on our website, allowing you to customize the RAPIRO with a 3D printer.

RAPIRO’s eyes can be lit up brightly by RGB LEDs.

As its name suggests, A Raspberry Pi is mounted in the head of RAPIRO.

Raspberry Pi is a credit card sized computer, which runs Linux. Its price is approximately £31($50), and it is able to connect to a PC display and speakers, connect internet with a LAN cable, and expand its functionality with USB devices such as wifi dongles, bluetooth dongles and so on.

Additionally, you can mount the Raspberry Pi Camera Module in RAPIRO

When you have your Raspberry Pi mounted in RAPIRO, the development possibilities are endless. For example:

*If you connect a wifi dongle or a bluetooth dongle to RAPIRO, you could control it with a smartphone or a game controller.

*A wifi-enabled RAPIRO could give you notifications of Facebook and Twitter messages, manage your schedules with google calendar, or tell you today’s weather and fortune as your secretary robot.

*If you embed a Raspberry Pi camera module, it could watch over your house as home security robot.

*If it heard your voice with USB microphone adapter, it could respond to your voice.

*If you embed an IR LED in RAPIRO, it could control a TV or a air conditioner.

or you may already have your own ideas of what you could do with your own RAPIRO!

*Doesn’t come with a PSD distance sensor and speakers.

RAPIROs can also work without any Raspberry Pi.

You can assemble a RAPIRO with only screwdriver, without needing any soldering.
The included servo control board is Arduino compatible and uses the ATmega328P chipset.

Using the documentation on website you can program its range of motion by yourself.

*This photo was taken when it was still under development. We will change Its layout and components to better.

RAPIRO is suitable for beginners and experts alike – it’s a great introduction to robotics, with the flexibility of the Raspberry Pi allowing you to customise RAPIRO to your needs.

Raspberry Pi originates from the UK. I am very excited to be using Kickstarter in the UK for the purpose to make RAPIRO accessible to the whole world from day one.

＜About Us＞
RAPIRO is developed by Shota Ishiwatari (Kiluck corp.) in collaboration with the following 3 companies, all of which are small‐sized manufacturing enterprises in Japan.

Kiluck corp. is Shota Ishiwatari’s company. I designed RAPIRO with 3D CAD, built the prototype circuits and wrote the code by myself. Additionally, we’re in charge of promotion.

JMC Inc. is a 3D print service company. We’ve collaborated with them to 3D print the prototypes.

SWITCHSCIENCE is a web shop that provides electronic components to the Japanese market. The company has been working on the development of open hardware in Japan. They have developed multi-language features for Arduino IDE, and donated it back to the community. SWITCHSCIENCE have designed the Arduino compatible servo control board of RAPIRO in collaboration with us.

MIYOSHI Co. Ltd. is a plastic injection molding company. RAPIRO’s parts will be manufactured by the company.

Our prototype is working well at present. However, there are always risks involved in designing and manufacturing new products. We would like to take on the challenge of overcoming these risks, and we feel that there are two major challenges with RAPIRO:

1) Metal mould
With the 3D printer we were successful in making our prototypes. If the kickstarter is successful, we will design metal mould to manufacture RAPIRO with. We aim to manufacture RAPIRO so that it can be delivered by Dec 2013. However, there is a possibility that the appointed date of delivery will be delayed by any troubles in designing the mould. In such cases the problematic elements must be fixed, which of course has a knock-on effect on product shapes of detail. But, I won’t change the design significantly.

2) The strength of the product.
We are carrying out our product design and looking into trial production, and we are giving careful thought to the strength of the product, but since RAPIRO is built with plastic and motors there is a limit to its strength – we can’t guarantee that RAPIRO will not break if handled roughly, although we will do our best to try and make it as durable as possible.

We have already started planning how we go about product design and manufacturing, but only after the completion of the Kickstarter campaign will we go into full-scale action.

When deciding upon our target sum and deadline, we have done our best to allow for any delays and price fluctuations, however, we cannot deny the possibility of late delivery due to unforeseen circumstances, such as the availability of factory space or material shortages. However, if a situation like that does arise, we’ll do our best to overcome the situation as smoothly as possible.
The current prototype is holding up really well, but there are always cases in product design when concerns arise regarding the product’s durability or safety. In such cases the problematic elements must be fixed, which of course has a knock-on effect on production and delivery.

We will, of course, keep our supporters in the loop with regular updates on the production of RAPIRO.